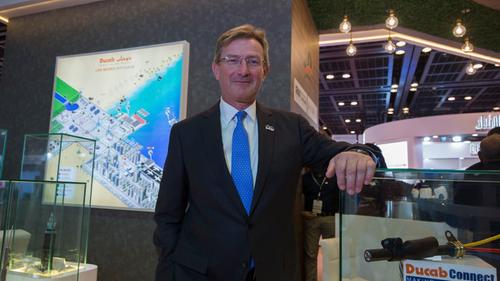 UAE cable maker Ducab plans to establish manufacturing bases in the region as it looks to capitalise on the Middle East's growing wind and solar energy market by supplying specialised cables for the sector, according to the company's managing director.

"We're looking at the broader region, Saudi [Arabia] is very difficult because of the capacity," Andrew Shaw told The National. "We want to access the market and find a way to get in but it makes sense for us to look into the broader region.

Ducab, a subsidiary of Abu Dhabi's industrial holding company Senaat, is exploring opportunities in Iraq, Syria and pockets of North Africa as well as East Africa and India, where there is significant demand for cables.

"Solar is growing so we've developed products to supply this industry, and we also take those products and sell them overseas."

Renewables have seen high capacity insatllation in recent years in the oil-exporting countries of the Middle East, where with Saudi Arabia and the UAE are implementing large-scale clean energy schemes. Saudi Arabia, the world’s largest oil exporter, is looking to add up to 40 gigawatts of capacity in photovoltaic and 3.2GW in concentrated solar power over the next decade. Dubai is looking to generate 25 per cent of its energy requirements from renewable sources by 2030 and 75 per cent by 2050 as part of its clean energy drive.

Ducab operates three business units: wires and cables; a high-voltage cable business in a joint venture with Dubai Electricity and Water Authority and the Department of Energy Abu Dhabi; and the Ducab Aluminium Company, which supplies aluminium rods and conductors.

Around 60 per cent of its output is exported, with the company aiming to grow its volumes slightly in the cables business and quite significantly in Ducab Aluminium Company, after its first full year of operation. The aluminium business, which has a capacity of 50,000 tonnes, was established in 2018 with an investment of Dh220 million from its parent company.

Ducab, which supplies cables and rods for large UAE projects such as the Sheikh Mohammed bin Rashid Solar Park and the Barakah nuclear power plant, is diversifying into more specialised products, supplying international clients in the wind, solar and nuclear sectors.

"We've done all of the power cables for Barakah and on the back of that we've also been able to supply the nuclear programme in South Korea," said Mr Shaw.

Ducab is also developing a range of cables for the wind industry, even though the sector is fairly nascent in the region. The company was the supplier for a wind scheme in the Dhofar region of Oman and provided its cables for a number of wind projects in North Africa.

The company is bullish on growth in Iraq, where large-scale redevelopment of damaged utilities and oil and gas infrastructure is needed after decades of conflict.

"It's relatively slow growth, we have a very active agent based in southern Iraq, in Basra," said Mr Shaw. "At the moment, we're supplying overhead lines and a couple of companies [that are] part of the grid rebuild. We're [also] supplying cables for the oil and gas industry."

Ducab, now in its 40th year of operation, has allocated Dh115m in capital expenditure so far this year, as it looks to increasingly adopt automation on to its factory floor.

About Dh3m has been dedicated to factory automation over the past two years, as the company collates data to further improve efficiency across its product lines.