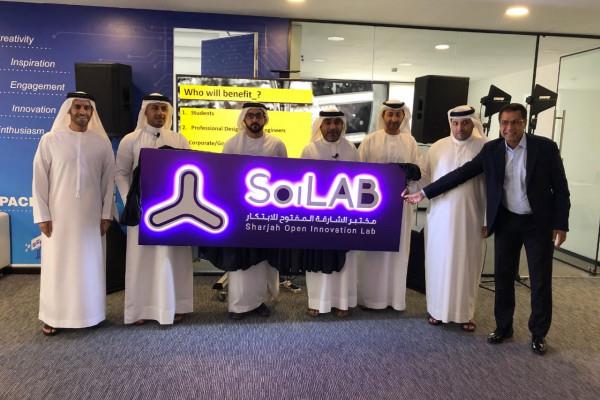 In the presence of Sheikh Fahim bin Sultan Al Qasimi, Executive Chairman of the Department of Government Relations in Sharjah, the announcement came during the third session, Industry 4.0, of SRTI Park Labs series. The name and logo of MakerSpace, called "Sharjah Open Innovation Lab", the first incubator for startups and innovative works in Sharjah, was also unveiled in the presence of Abdulla Alsaleh, Undersecretary of Ministry of Economy for Foreign Trade, Abdallah Al Shamsi, Assistant Undersecretary for the Industry Sector at the Ministry of Economy, Marwan bin Jassim Al Sarkal, Chairman of Sharjah Investment and Development Authority, Shurooq, in addition to a number of experts and specialists from the public and private sectors and a number of representatives of leading international companies in the smart industries and 3D printing technology.

The organisation of these sessions comes as a part of a global vision brought about by changes that highlighted the features of the fourth industrial revolution, marked by unprecedented changes in the life of mankind.

Sheikh Fahim spoke about Sharjah as a place for investment and innovation, highlighting the strengths of the Emirate, which enables it to be a leading global center in the field of innovation, research and entrepreneurship and its vision to enhance its position in the field of digital technology and to become one of the smart cities in the world.

"This project reflects the vision of H.H. Dr. Sheikh Sultan bin Muhammad Al Qasimi, Supreme Council Member and Ruler of Sharjah, to invest in the innovative sector in the emirate. The smart investments have begun arriving to the Park, which is the pride of the scientific development in the Emirate."

Speaking about these projects, Hussain Al Mahmoudi, CEO of SRTI Park said: "We aspire through these projects to promote the Emirate of Sharjah as the capital of innovation globally and 3D Printing plays a key role in the future of many sectors from construction, medical, and aviation to everything in manufacturing. We at SRTI Park look to foster innovation by providing companies access to a wide array of 3D printing technologies starting with metal 3d printing all the way to concrete 3d printing at the Middle East Additive Manufacturing Center."

Launched at SRTI Park in strategic partnership with Immensa and other partners, the Middle East Additive Manufacturing Center is another step in propelling the UAE to the forefront of Fourth Industrial Revolution and in becoming a global center for 3D printing. The Center will be equipped with a range of industrial 3D Printers including globally leading machines such as Concept Laser from GE Additives.

The session covered topics such as Digital Fabrication in UAE, Robotics & Digital Construction, AI & Production and MakerSpace of the Future, in addition to a panel discussion. Hussain Al Mahmoudi, CEO of Sharjah Research Technology and Innovation Park, said Sharjah has come a long way in the field of sustainability thanks to His Highness Sheikh Dr. Sultan bin Muhammad Al Qasimi. Sharjah today ranks among the top cities in the region for sustainable development.

This initiative by SRTI Park marks a significant milestone in the UAE and wider region. The 3D Printing Center for Metals will be open to use by companies in various sectors and will be a major boost to 3D printing. Immensa the region's leading additive manufacturing company already has numerous projects in Oil & Gas, heavy equipment maintenance, maritime, and other sectors that will benefit from the new center from the first day of its launch.

"We specialise in 3D technology and this collaboration with Sharjah is a major step for the region to promote this technology as it is the first of its kind in the region and we have seen a huge demand for 3D printing in the UAE with international and regional companies working with Immensa to start producing multi-purpose parts that are in the production process for their operations," Fahmi AlShawwa, CEO of Immensa. "We are very pleased to be partnering with SRTI Park in establishing a production facility for the manufacture of metal additives and look forward to working with the team in building the UAE's position as a global center for industrial 3D printing."

The market size for metal Additive Manufacturing was US$2.6 billion in 2018 and is growing at 20% per year, which presents an enormous opportunity. It is estimated that total value of parts that could be produced using metal 3d printing will top USD 14.2 billion within the next 5 to 8 years. SmarTech Publishing projects that in 2021, revenues from the oil and gas industry alone will bring US $450 million to the 3D printing sector and that this will grow to around US $1.4 billion by 2025.

Thanks to the increase in research and product development activities, the need for more creativity in the design process has increased. 3D printing will facilitate production and manufacturing in various sectors to ensure a pioneering shift in the industrial world.

Thanks to the increase in research and product development activities, the need for more creativity in the design process has increased. 3D printing will facilitate production and manufacturing in various sectors to ensure a pioneering shift in the industrial world.

The opening of the Middle East Center for Additives Manufacturing and the MakerSpace at SRTI Park was inaugurated based on the philosophy of establishing a community partnership mentality, cooperation and creativity as a guiding framework for the programs and services provided in a safe environment and space that allows participants to learn new skills and focus on engaging them by allowing schools and universities to be a part of this project.

Ismail Touq, CEO of BenchWork Design and Technology, a start-up focused on developing projects that open advanced manufacturing frontier to a wider spectrum of innovators, spoke about business centers in their modern concept, outlining some of the international models in this field and the usefulness of their existence.

MakerSpace is a term that first immerged in 2005. This concept of accessible places for design and production is linked to the opportunity for people to explore and learn how to use tools and materials and develop their creative projects and a place where researchers, developers, students and others gather to share resources and knowledge.